Nautanki Saala is Rohan Sippy's fourth directorial and an official remake of a French romantic comedy Après Vous. At a time when mainstream Bollywood is all about floss, hindi remakes and high budget this small budget contemporary movie comes out as a refreshing one. 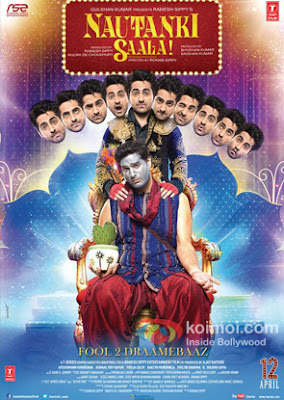 The plot of the movie is nothing out of the box that leaves you gaping for more but the star cast is good with the acting being very poignant and natural. Unlike most movies that are action oriented with less interaction, this one is dialogue oriented and character driven. This is the best aspect especially for people who love movies that relate to real life and not just the glamour of an alternate world that doesn't exist.

The movie stays true to its word and there is full on drama involved in their everyday life. Ayushmann Khurrana and Kunaal Roy Kapur keep the story flowing with timed humor, comic punches and loads of dramebaazi. The movie kicks of as a flashback with a sappy Ram Parmar: RP (Ayushmann Khurrana) a stage actor hugging a teddy bear and reminiscing how he met Mandar Lele  (Kunal Roy Kapur) dubbed as 'zakhmi narcissist' by RP's girlfriend who was on the verge of committing suicide; only to be saved by Ram who takes him home thereby turning his own life topsy-turvy.

The movie evolves further from then on unraveling a genuine friendship and a love story that soon turns more into a complicated love triangle combined with a theater drama going on in the background. In short, a big jumbled puzzle courtesy all the drama that is the core ingredient. 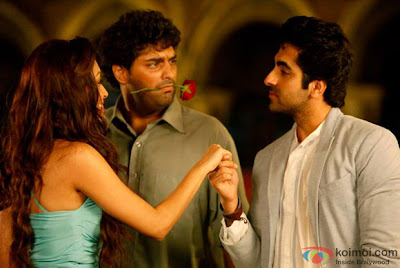 Although the pace of the movie is slow, it is clean and crisp with no loose ends. The music is light making you want to groove and compliments the movie beautifully at every step. Also the cinematography is good unfolding Mumbai artistically.

Like every movie, this movie too has it's flaw. And sadly the pace is not it's weak point but the characterization of Nandini the female lead. Her acting does not look natural but more of a overdone made up act that doesn't really gel with the smooth flow of the movie and other actors.

Lastly, though the storyline has a little flaw but overall it is acceptable. After a series of not so satisfying movies in the recent past few days this one is genuinely pleasant both story-wise and performance wise.

Overall the movie ends up holding the audience till the very end and so I give it a  3.5 out of 5.


It was a varied group comprising of both men and women tied together by the bonds of blogging that met on the warm summer afternoon on Saturday the 30th of March at the Times of India, Mumbai Office organized by IndiBlogger to discuss the issues affecting women following the recent cases of abuse and need for safety under “Mumbai For Women” initiative. The discussion focused the city’s duty towards the female populace irrespective of their social standings and age.

From teenagers to senior citizens, to women who are homemakers and breadwinners and even men sharing horrifying incidents happening to colleagues and relatives sparked off the discussion. Not just deserted or shoddy lanes but even busy roads, local trains and platforms are common target areas. In a matter of few seconds everything dissipated but just one question, “Is this really an Independent India where women are neither safe in broad daylight nor after the night lights are out?” remained unanswered.


According to the graphs and reports, Mumbai is by far the safest city for women. But is this what we really are aiming for, safety in the name of submission? And yet in spite of Mumbai being termed safer there are still cases of manhandling, rape, sexual harassment to name a few on daily basis. It is barbaric to know that age doesn’t matter when it comes to being a victim. “I feel safe in other countries but not my own,” said one female travel blogger. While another blogger, narrated a grab and run case that happened with his wife just outside a busy railway station.


When we say safety, it’s not just linked to the upper class of the society but to even the lower one. Not to forget, there is still a section of society that lives below the poverty line where there are hardly means of earning a livelihood let alone ensuring safety for women. Bridging this gap between the middle class and poor is easier said than done. Inculcating the boys with equality, teaching them they are not superior to women but equal on every front is the need of the hour.


There are so many cases where the wife who is the sole breadwinner of the family gets beaten by her husband whenever he is drunk, moreover she accepts this and says, “He loves me he is just a little put off as he is drunk and I don’t make more money.” And this is not just the story of a maid this even happens in upper class houses but women are afraid to speak wherein they should break their silence.


All this liberation and unity can only be attained by education, still how many of us who are educated are willing to step out of our comfort zone volunteering to teach and guide these people? There are only a few handful of people willing to help, rest of them just blame the system.

Time and again the police forces, the government and even the railway police are blamed for lack of adequate security, helpline numbers et al. What people really need to understand at this stage is that, the system is what we make of it and not what it makes us. There might be some petty officials who are corrupt but not everyone is the same. “Some days back my friend forgot her laptop in train, she immediately called the Railway Helpline number 9833331111 and to her relief she got back her laptop back within an hour,” said a fellow TOI employee during the discussion. Another quoted, “I travel by train daily and I once noticed that the railway helpline number written on the inside of the compartment was scratched yet the various meaningless posters that are put up were left untouched.” If, this is the attitude of citizens then what help would the government officials be? It’s high time the blame game is stopped and even citizens take their duty seriously.

When you see something wrong, raise your hands and stop it. At the same time when someone does a good thing encourage and reward them. Appreciation and motivation go a long way thereby making people responsible. Change is inevitable and it begins in small steps. Encourage the Times Of India, Mumbai For Women initiative and also look out for the Job Fair for women at R A Podar College, Matunga(CR), Mumbai on the 6th and 7th of April between 10am to 5pm.

Mumbai, the city of dreams bustling with busy life racing against time, where people don’t have enough time to stand and stare has finally come together and joined hands for the safety and betterment of women.

Today it is one city tomorrow it will the entire nation. Let us be the change, we wish to see. As Helen Keller said, “Alone we can do so little together we can do so much.” 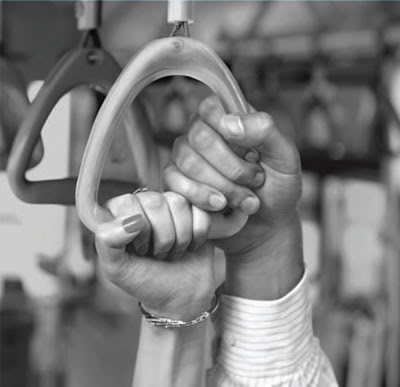 It's a beautiful world...Enjoy it and Explore it !! Like wise It's a beautiful Life...live it…love it…don't regret any moment of it..mistakes are made to be corrected ....Make the Most out of the least !!

Fatima
Know me to Know Me ! 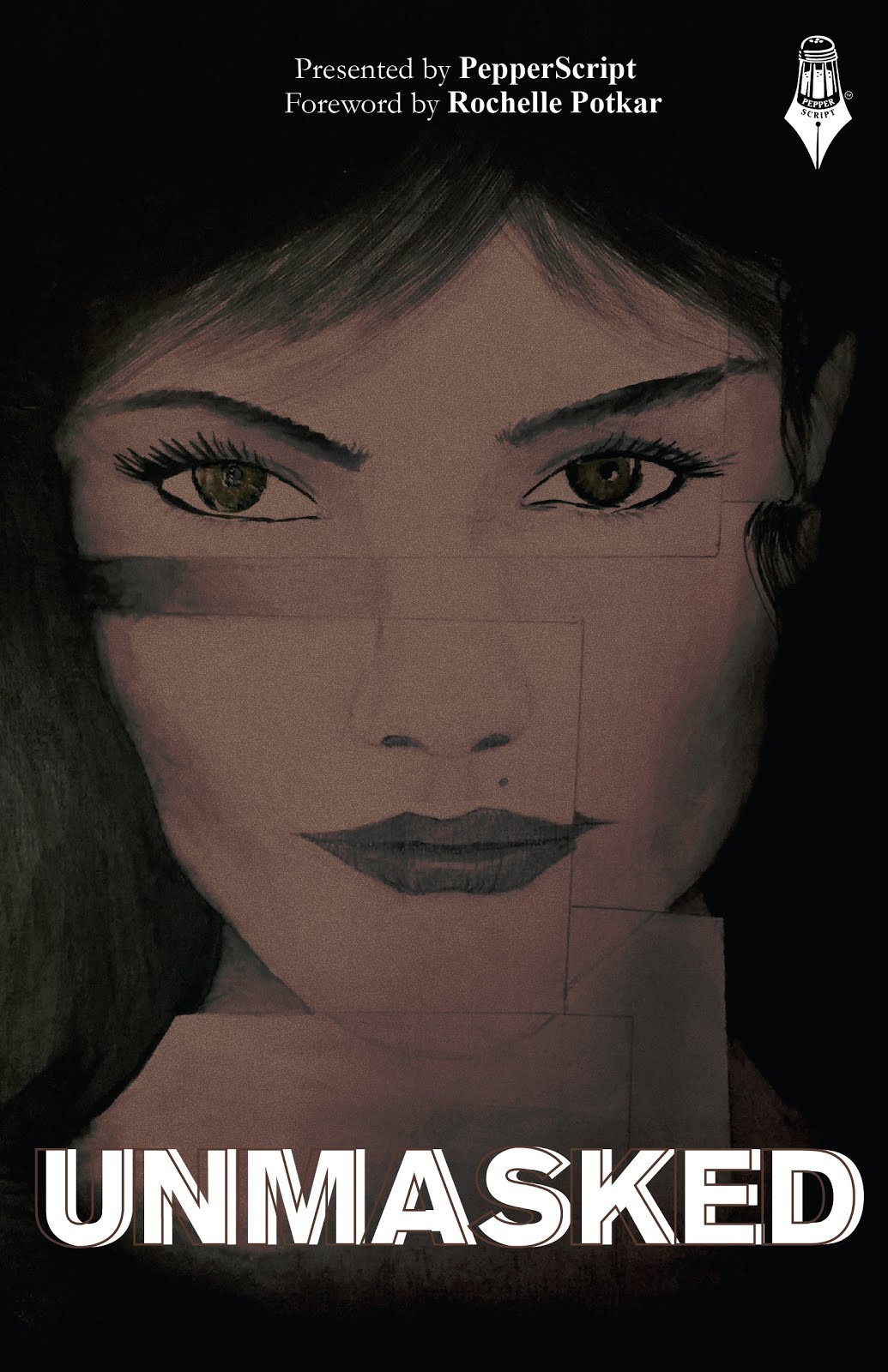